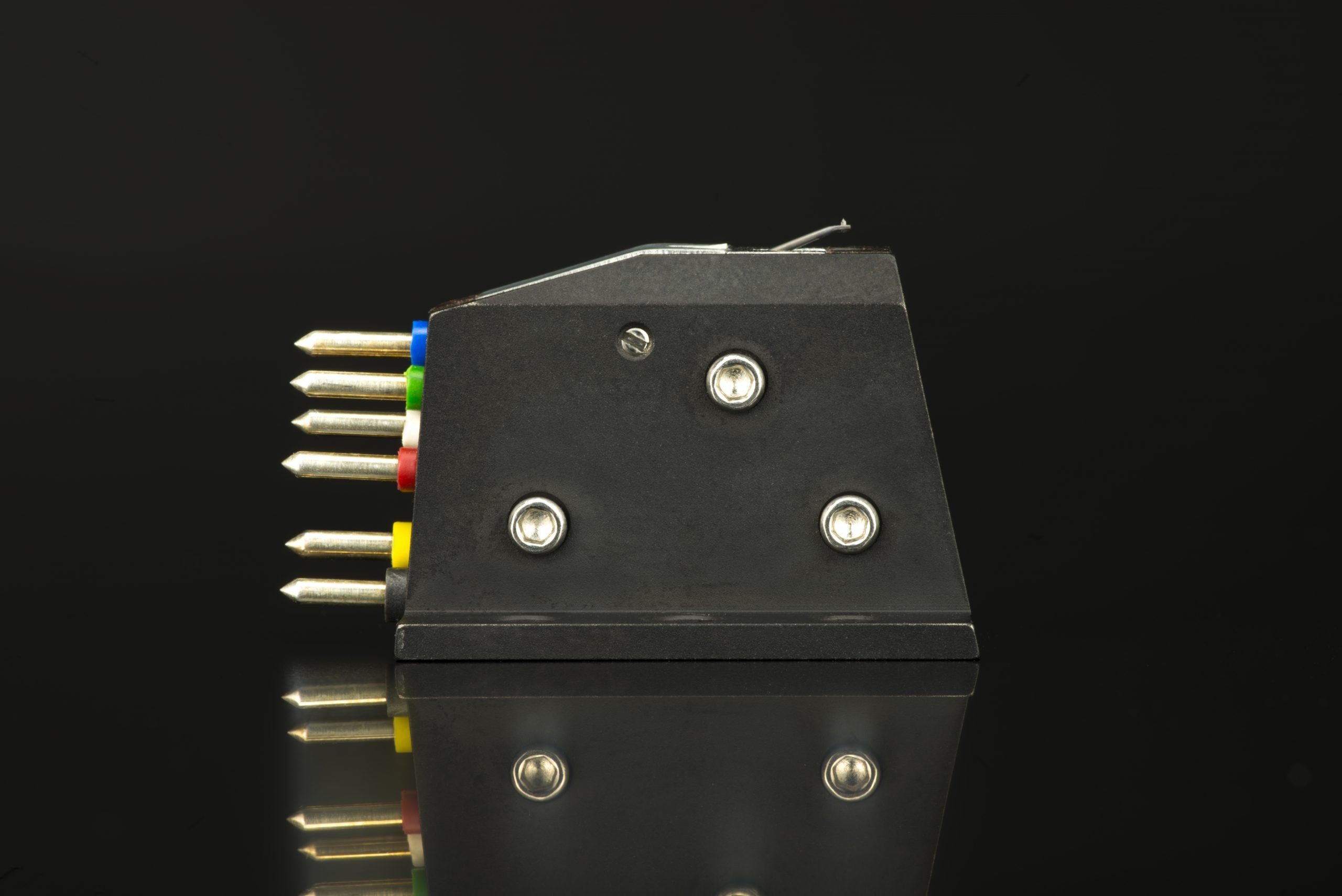 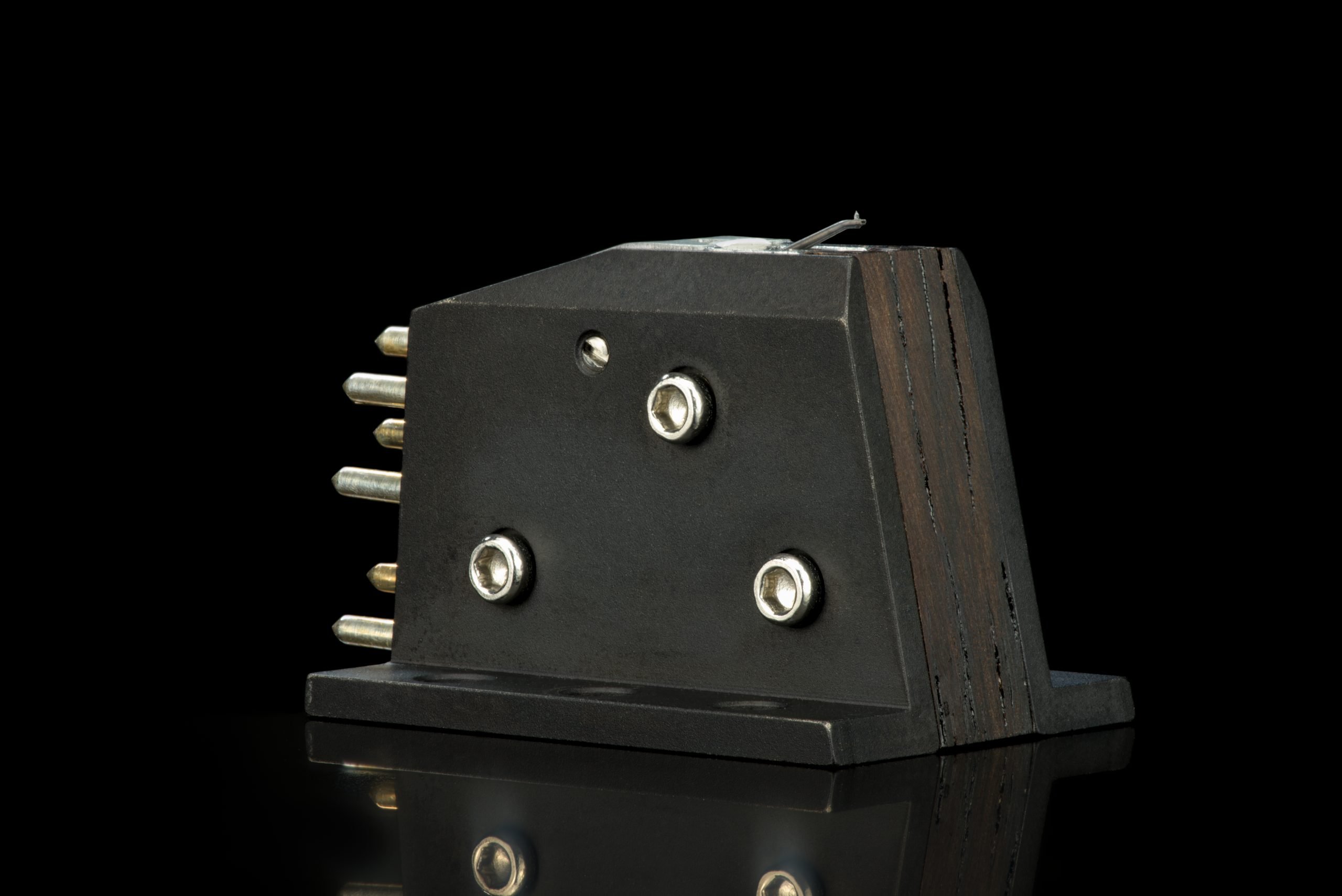 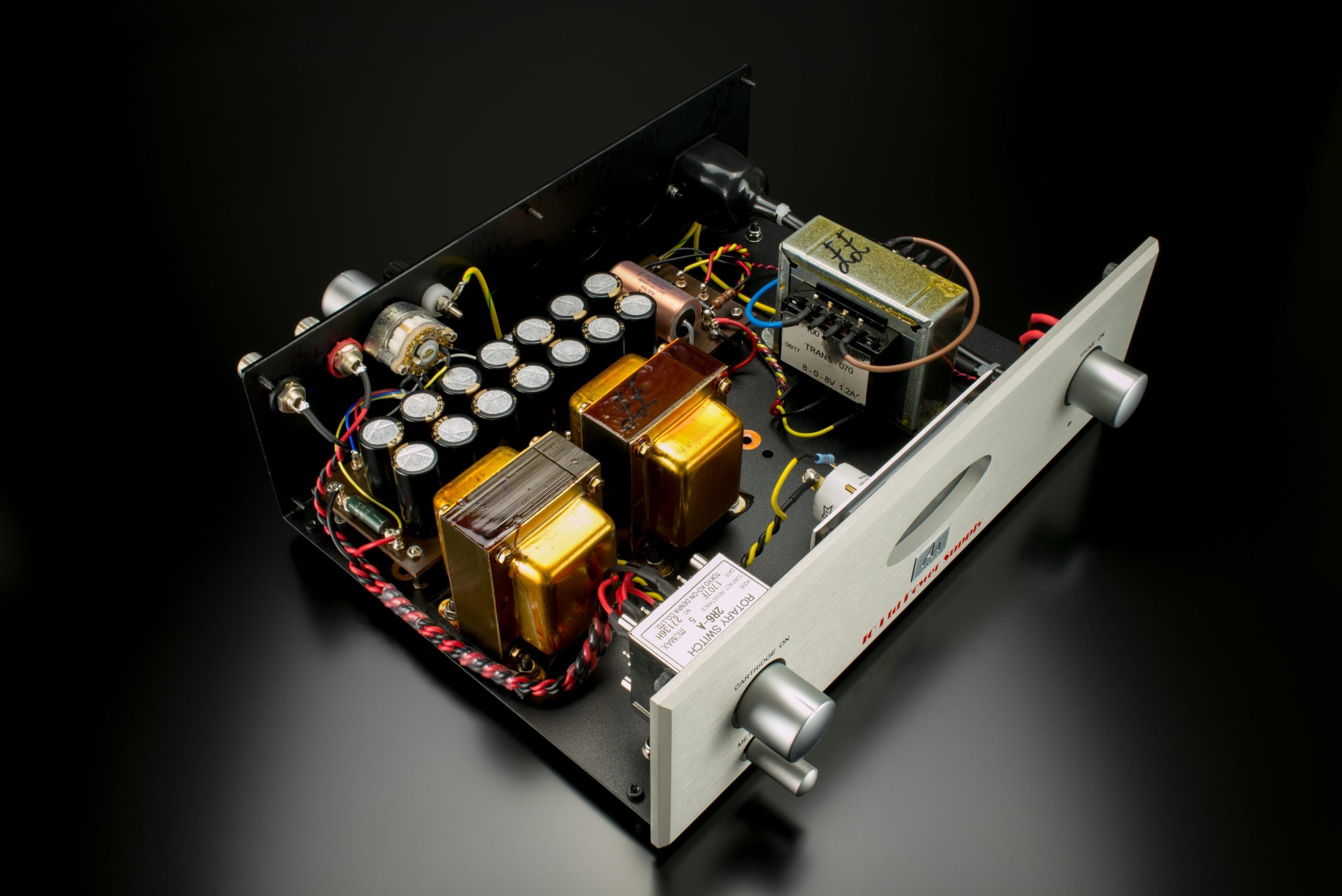 The moving coil principle was chosen as the basis for the design of the IO range of cartridges, as it offers greater linearity in terms of electrical output from the mechanical movements of the stylus than any other system. We investigated moving iron, moving magnet, strain gauge, electret and electrostatic generators, and even took the unusual step of acquiring a Toshiba cartridge that employed light emitting diodes to generate the signal from the groove, but in the end it was felt that the quality of the moving coil system as described by P. G. A. H. Voigt would yield the best overall results.

To ensure that the stored information on the disc is precisely recovered, it is essential that the mechanical movement of the stylus is accurately translated into an electrical signal. Any extraneous excitation arising as a result of vibrations in the cartridge housing must be eliminated.

Therefore in the design of the Audio Note (UK) cartridges considerable attention has been paid to the rigidity and structural integrity of the body, and to ensuring that the adopted mechanical construction stores the absolute minimum of resonant energy, which will degrade the signal derived from the disc being played.

Mechanical integrity of the cartridge body is an aspect of design that has never been adequately dealt with before, and as a result all other cartridges suffer greatly from colourations derived from internal resonances and/or energy stored in their body assemblies.

To achieve the incredible level of mechanical integrity required for the IO cartridges, all aspects of body design were reexamined, to minimise standing waves and eliminate any resonating air pockets within the assembly.

The benefits of getting the mechanical assembly right would be lost if the complete assembly could not be rigidly mounted in the tonearm, hence the incorporation of the largest possible surface mounting area and the provision of up to six (6!) bolts to secure the cartridge to the head shell.

Once the mechanical assembly had been perfected the next area to which particular attention was paid was the magnetic circuit.

From numerous tests carried out on a variety of materials and configurations, it was established that different types of magnetic materials exert a subtle influence on the perceived quality of the final sound.

After further extensive research the optimal magnetic circuit was found to be electro magnetically generated. This, however, requires a separate DC power supply and is very costly to implement. Therefore, only a cartridge producing the absolute ultimate in performance could employ such a system… and the IO Limited was born.

Because of the low impedance and very low output of the IO Limited, it is essential that the minimum number of electrical connections occur along the wire and that the wire itself is of the highest possible quality. Not surprisingly we chose our custom made Audio Note (UK) 99.99% pure silver wire, and the coil wire extends all the way to the output terminals, avoiding all unnecessary connections.

It is on the design and construction of the cantilever that much of the quality of a cartridge depends. Many materials were investigated, Boron, Beryllium, Sapphire, Diamond and Titanium and all except Titanium were disregarded in the final analysis, due to deficiencies in one or more areas.

It is vitally important for the cantilever and stylus assembly to be as rigid as possible in order to accurately transfer the stylus motion to the coil assembly, without adding any unwanted vibration as a result of flexing or bending.

The optimum cantilever material here was found to be an extra thick walled, slightly tapered Titanium tube, the taper being both outside AND inside, since this affords by far the greatest rigidity.

Another advantage provided by this type of material was the possibility of employing a longer cantilever, which greatly reduces cantilever excursions. This has three main benefits: –

1) It is easier for the stylus to track complex, highly modulated grooves.

2) The resultant smaller coil movement reduces the non-linearity of the magnetic field, so the field will ‘bend’ less.

3) Damping can be reduced, as it becomes easier to control stylus movement.

As mentioned above, damping of the cantilever is extremely critical. Too much and the cartridge will sound dull, as a large amount of the critical energy from the record will be absorbed in the damper instead of reaching the coils, reducing the efficiency of the energy transfer from the record (as vibration energy) to the cartridge (as electrical energy).

Conversely, too little damping will make the cantilever prone to uncontrolled excursions, resulting in unwanted distortions and poor tracking.

Much experimentation led to a precision Butyl rubber damper, offering a wide operating temperature range and minimal hysteresis effects. The tension on the damper is furthermore adjustable, allowing very accurate set-up of each cartridge’s individual suspension.

Finally the assembly is completed with the use of a solid diamond stylus. A heroic degree of effort has been expended finding the best possible solution to this, the most critical interface with the “plastic”. Having been ultimately unsatisfied with the offerings from the various stylus manufacturers around the globe, in 1995 we contracted a company to develop a process which would allow them to cut and polish a perfect, natural octagon to a level of the best surgical instruments used for eye and other fine surgery, on a diamond less than half the size of the closest, readily available option at that time. This remains to the best of our knowledge the finest diamond in use on any cartridge available today.

The improvements over any standard diamonds use in other cartridges can be briefly described as better tracking of high frequencies, lower surface noise, lower record wear, longer stylus life, smaller tip mass and lower tracking force.

The stylus is first ‘pinched’ into place by the cantilever and then glued, using a single component epoxy resin, which needs ‘baking’ for about three hours to harden.

After assembly, each cartridge is subjected to a series of tests, one of which involves a fast dynamic frequency sweep, at high amplitude; this method shows up any undesirable problems in the cartridge. Special test equipment and test records had to be developed for this process, which is exclusive to Audio Note (UK).

Greater than 30dB at 1KHz