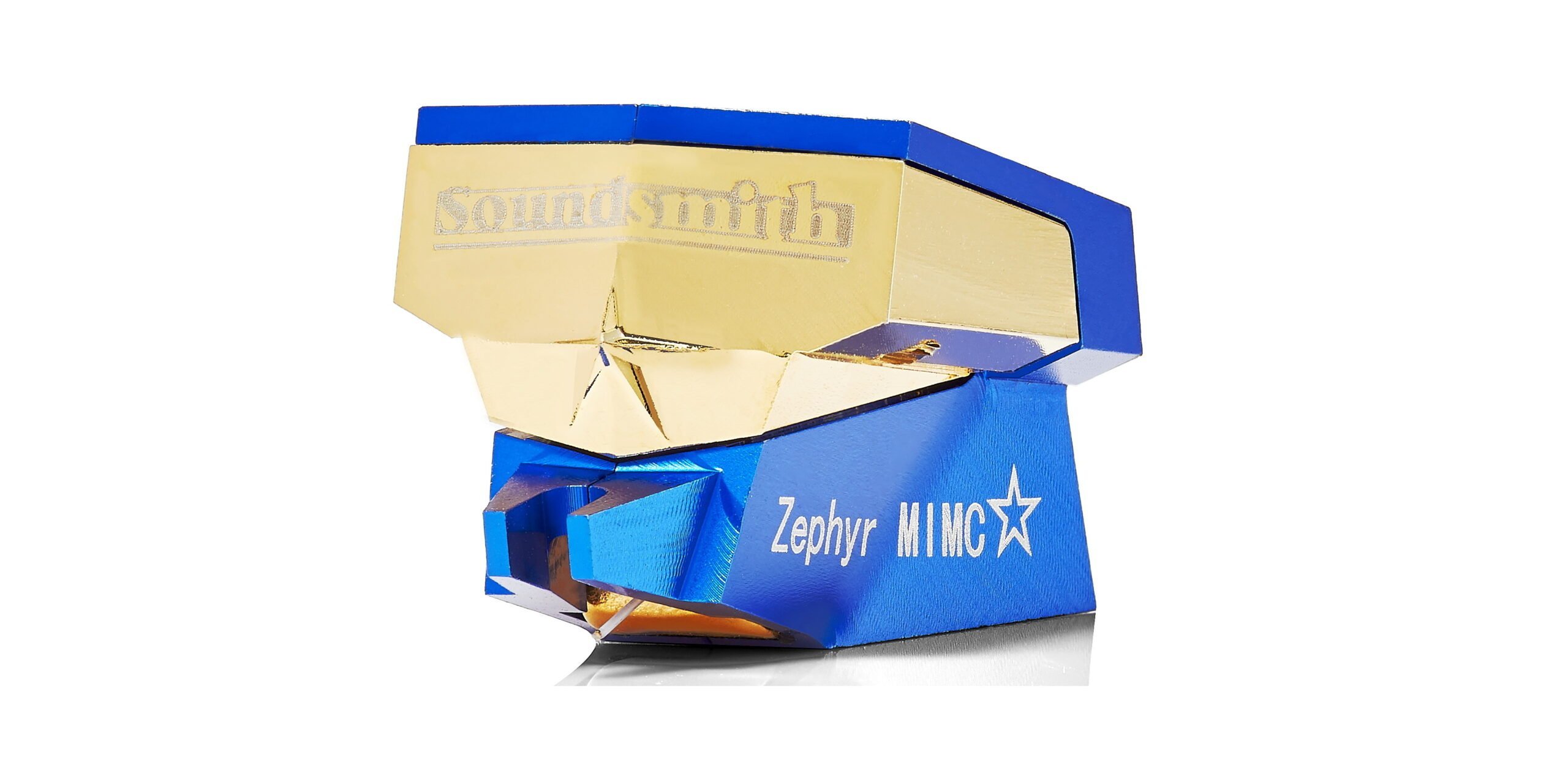 Zephyr MIMC was our entry-level to the high-performance world of Soundsmith’s MC-pre-compatible, low-output cartridges. It brought a very nice portion of the performance available in our higher-end MC-compatible cartridges (Paua, Sussurro, Hyperion) to the more affordable sub-$2k category. Recently, Peter Ledermann decided to see if he could stretch the limits of the MIMC’s performance even higher without stretching past the $2k price point … little did any of us know how far he would be able to take it! The updated Zephyr MIMC ☆ smashes through sonic barriers with its new laser-drilled Sapphire cantilever and select nude Contact-Line diamond stylus! This is probably the most important Soundsmith model to have in your arsenal. It brings an astounding portion of the performance available only in our top-level low output cartridges, and it does it for just $1,999 retail (USD) ! We’re so excited about this model that we’ve put together our best promotion ever for it – we call it the “Golden Ticket” program: We will be giving away Soundsmith products to customers who purchase the new Zephyr MIMC ☆ via a Golden Envelope inserted into each Zephyr MIMC ☆ cartridge box, ranging from EZ-Mount Screws to Strain Gauge 210 systems! We’ll be spreading the news about this promotional program very soon on Social Media, with specifically-targeted focus to the countries where we are distributed. We want your customers to know all about this extraordinary product, and this outrageously cool promotion! Come visit us at High End 2016 in Munich, Hall 4 Booth T02 to see the Zephyr MIMC ☆ in person and find out why now is the best time to be in business with SOUNDSMITH – makers of the world’s best and most unique phono cartridges – – and the WORLD’S BEST REBUILD POLICY! Also available in dual-coil mono.

Another positive review of the MIMC Star, at Positive Feedback ” Listening to the music using this pickup is incredibly enjoyable. Zephyr also has incredible dynamics. “

Luxury You Can Afford (for the full review: click this)

…….. Zephyr MIMC Star is Soundsmith’s entry point into its high end, low output lineup. Before you consider that not “affordable” consider that if you mess up and snap the cantilever during installation, Soundsmith will rebuild it at this time for $350. Even after you’ve worn out the stylus, the cartridge can be rebuilt for the same amount “at this time”. Most MC cartridge “re-tips” cost approximately half of list price, so do the math: you get “two” Zephyr Stars for around $2100.

Right now Soundsmith is offering another buying incentive: buyers of the first 1500 Zephyr Star cartridges will receive a small golden envelope corresponding to a free gift from Soundsmith ranging from a set of EZ Mount Screws (1420) to an SG-210 Strain Gauge cartridge (4). In between are Hyperion cartridges (6), Sussurros (10) and four other cartridge models (15 each). So you are guaranteed to get something if you buy one of the first 1500 Zephyr Stars.

The Zephyr Star, which weighs 10.27 grams, features a Sapphire cantilever …..laser drilled to accept the Selected Contact Line low mass nude stylus, and borrows much of its internal technology from the $4800 Sussurro cartridge that I reviewed some time ago in Stereophile. The Zephyr Star’s compliance is suitably low at 10µm/mN, its rated channel separation at 1K is rated at greater than 28dB and 25dB between 50Hz and 15kHz.

The name is an acronym for “Moving Iron for Moving Coil preamps). In other words, with its .4mV output, the MIMC should be used with a moving coil phono preamp capable of producing between 58-64dBs of gain.

Rather than going through Soundsmith’s advocacy here, why not go here and read for yourself the company’s claims for the technology……

Two claims I will corroborate are those for quiet hum-free operation and especially the one for high dB channel separation. I measured 35.5dB of separation in both directions (L-R and R-L) with the head shell parallel to the record surface, no azimuth adjustment necessary. Now you could say this one was “hand picked” for the review, but that’s also possible for other cartridges I’ve been sent for review, and other than a $9995 Lyra Etna SL that measured 36dB (and not the one I was sent, but rather one I recently set up for a friend), I’ve not measured another cartridge that produced such crosstalk results.

As the measurements predicted, the Zephyr Star produced as wide a soundstage as I’ve experienced in my room: wide, deep, stable and three-dimensional. Images on the stage were three-dimensional and satisfyingly solid. More impressive was the presentation’s liquidity and complete freedom from mechanical artifacts.

The Zephyr Star smoothly handled the toughest vocal sibilants and overall produced liquidity not compromised by a soft finish.

One of the first records I played was Analog Sparks’ spectacular reissue of A Fiddler on the Roof (79301836821-6/RCA LSO-1093) finally not hobbled by Dynagroove processing. This 1964 Webster Hall recording features a wide, some might say overly L/R staging but the presentation through the Zephyr Star was ultra-stable and well reproduced the reverberant field that holds together the mix despite the occasional separation extremes.

The front to back three-dimensionality projected Zero Mostel well into the room well forward of a line between the speakers, and the effect was to bring the great actor back to life in the ways only the very best cartridges manage.

However vinyl’s dynamic range gets measured, the reality is far wider dynamics than measured as this record proves. You won’t be disappointed by this cartridge’s spatial presentation, I don’t care what cartridge you use or how much you’ve spent.

Installed in a Kuzma 4 Point, the Zephyr Star proved to be a super tracker and with its low mass Contact Line stylus an equally good tracer, able to get into the smallest groove “nooks and crannies”. I played ORG’s double 45 reissue of Ella Fitzgerald Sings the Rodgers and Hart Song Book (Verve MG VS-64022/ORG 055) and found the liquidity, and freedom from mechanical and/or sibilant artifacts made for very smooth and enjoyable listening but with transient details mostly intact. The Zephyr Star is a “smoothie” without being a “softy”.

In term of frequency response, I found the Zephyr to be without “lumps” and obvious “bumps”. With the phono preamp correctly configured, the subjective response is neutral with perhaps a bit of an midband overemphasis that produces a billowy, airy fullness that well complements many speakers. The Zephyr’s bottom end is robust and well-controlled, while the top end is airy, extended and seemingly limitless—all without producing edge, spotlighting on top or bloat on bottom. An impressive tonal performance! Conclusion

At the under $2000 price point, the new low output Soundsmith Zephyr MIMIC Star is an overachiever that gives you a glimpse of the best in terms of non-mechanical, artifact-free performance, for a small percentage of the state of the art asking price. With measured 36dB chancel separation the Zephyr Star’s spatial performance is up there with the best at any price, as is its smooth, reasonably fast and non-mechanical overall demeanor.

If you crave more tightly drawn, solid and compacted images, sharper, faster, better focused transients and blacker backgrounds they can be found, but at a far higher price-point. Soundsmith’s new Zephyr Star is a star.

“At the under $2000 price point, the new low output Soundsmith Zephyr MIMIC Star is an overachiever that gives you a glimpse of the best in terms of non-mechanical, artifact-free performance…” – Michael Fremer / analogplanet.com – Click Here for Full Review

Workmanship on this product is warranted for 2 full years

How to Choose a Cartridge