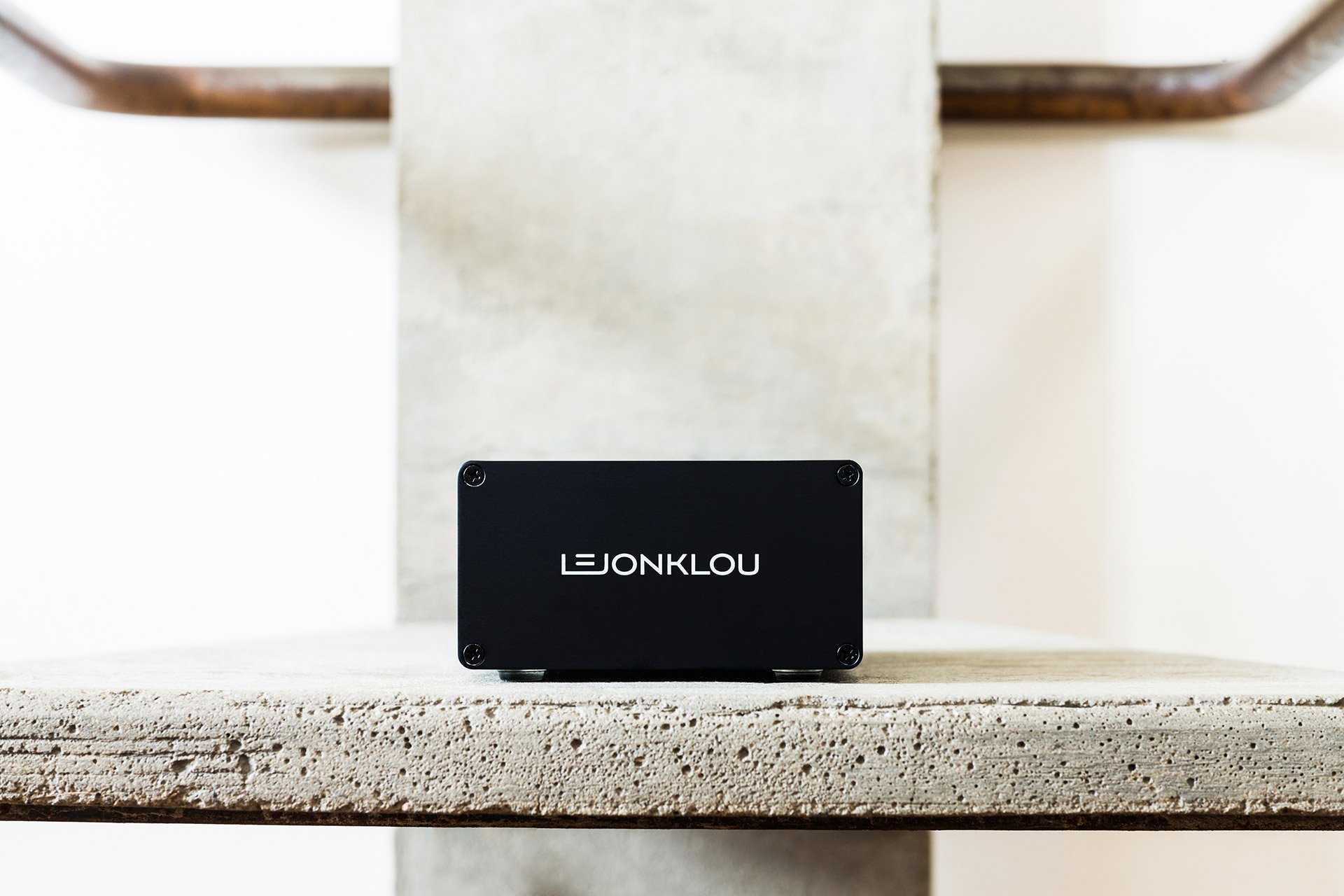 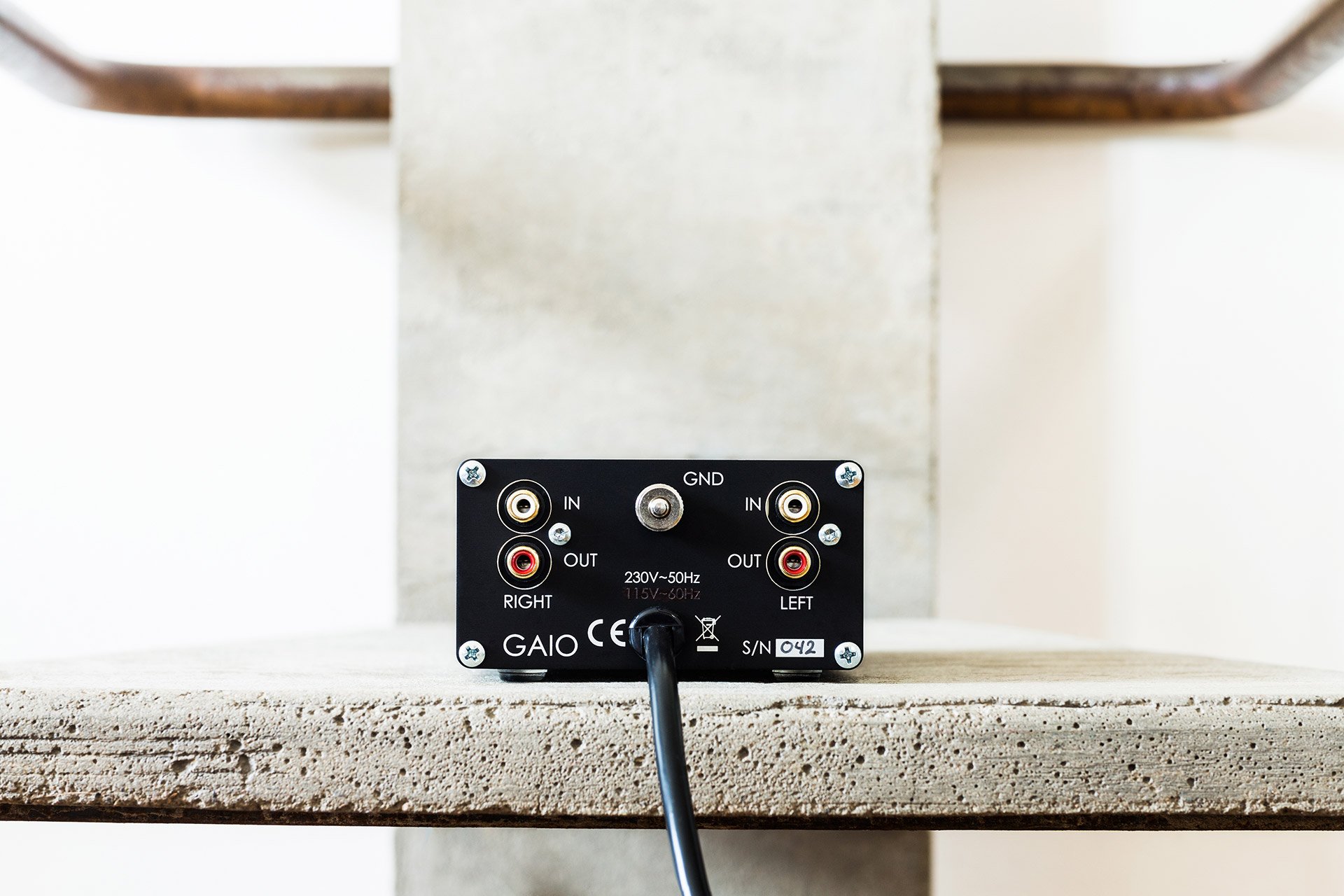 Gaio is housed in a very compact black anodised aluminium enclosure that occupies 59 mm in height, 103 mm in width and 180 mm in depth.

It is available in a European, a British and a North American version.

Gaio replaces our best selling product KINKI3. It was for several years recommended by the american HiFi magazine Stereophile. Gaio started out as a fourth version of Kinki, but after a month of fine tuning its design, so many changes and improvements were made that a new name felt appropriate.

In April 2018, a new and improved version of Gaio was released; Gaio 2. It borrows some components from my top of the range Moving Magnet phono preamplifier Slipsik and also benefits from improved high frequency tuning of the circuit board – lessons I learned from working on the Tarandus upgrades of my pre and power amplifiers. Gaio 2 is also manufactured entirely in Sweden.

In February 2020, Gaio 2 was upgraded with four new components. The result is a more enjoyable musical experience, with a deeper and more accurate low bass, a cleaner overall sound and improved musical timing. Gaio 2.4 is now closer in performance to its big brother Slipsik than I thought possible. Every Gaio 2 can be upgraded to version 2.4.

Gaio 2.4 was very favorably tested in the October 2020 edition of the Norwegian HiFi magazine Stereo+. It was graded: Flexibility 9/10, Quality 9/10 and Sound value for money 8/10.

• Optimisation: Gaio 2.4 is manufactured of components that are pre-measured and selected into small groups. This makes every unit perform at a higher level than previously possible. After the manufacturing and assembly in Sweden, every unit is fine tuned in my lab before it’s shipped to the customer.

• The circuit board: A careful layout has a large impact on sound quality. Gaio 2.4 has step by step been evaluated with different layouts, until the best and most compact solution was settled upon.

• Power supply: The power supply of Gaio has been developed over a long time. The aim is to make sure it doesn’t interfere with the musical signal. The encapsulated transformer is hand soldered directly to the circuit board and the power cord. The power cord from Longwell is twice as expensive as the cheapest alternative, but it makes a significant difference to the musical performance. It must not be cut down or replaced!

• Enclosure: The small enclosure is optimally damped from the inside with 77 square cm of bitumen and important fasteners are tightened with precision torque tools. The ground to chassis connection affects sound quality and its assembly is therefore specified in careful detail. The feet are chosen for best sound performance and are adjusted so that the case sits perfectly stable on a flat surface.

• Attention to detail: Common to all products from Lejonklou is an extreme attention to detail. Every product I develop is crafted by hundreds, sometimes thousands, of listening tests. Even seemingly unimportant details are carefully evaluated. Whenever possible I use blind tests, because they make difficult decisions easier. Everything I do and every result is written down and later studied in an attempt to find another angle. When I describe my development process to colleagues who work for other HiFi companies, they think I’m overdoing it and consider me mad. That’s OK. Mad attention to detail is the single most important factor when making a HiFi product that has the ability to let the music reach out and touch you.